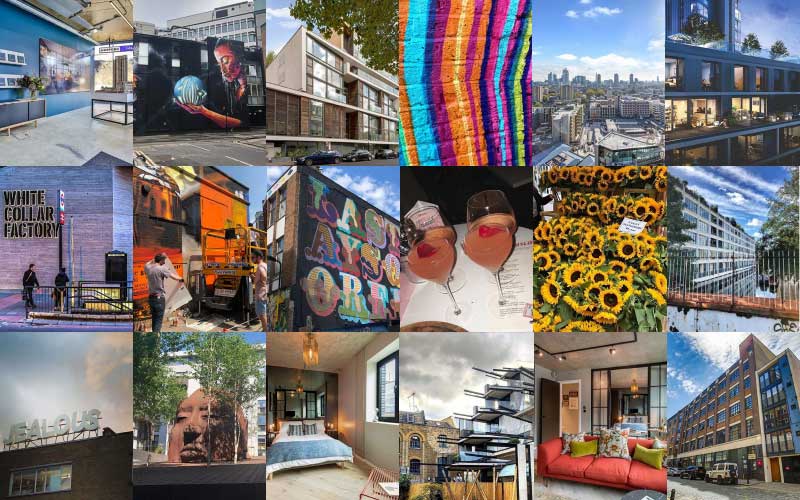 Shoreditch's industrial past has meant that the area has some exquisite and quirky spaces, with many disused factories dating back to the industrial revolution, when the area was the working heart of London. Many of these properties in Shoreditch EC2, housed printers, tailors, furniture makers and ironmongers. These interesting spaces have now been transformed into some of the most sought after apartments to buy and rent in Shoreditch.

It also offers a range of period properties, converted apartments as well as numerous new built homes and mixed-use developments. Recent times have seen a spate of luxury high rise apartments, this is particularly evident at Shoreditch’s northern border, along the City Road where buildings such as The Eagle, Canaletto and The Atlas Building have taken Shoreditch Living above 40 floors.

Hurford Salvi Carr estate agents has seen property prices rise considerably in recent years, thanks largely to the ongoing gentrification of the area as well as many Shoreditch properties offering eclectic and adaptable living spaces. Shoreditch, Hoxton, Spitalfields and the Shoreditch Triangle represent an attractive proposition for young professionals, whilst the area around Old Street has emerged as a tech hub with many technology companies moving there.

Shoreditch's reputation is that of a “hip” and “happening” place with a global reputation for its avant garde art scene. It is without doubt London's home for creative types with over 100 galleries in the area and the likes of artists such as Tracey Emin, Damien Hirst, Banksy and Gilbert & George associated with the area.

Hurford Salvi Carr's residential sales and lettings office which is based on City Road has a number of properties for sale and for rent in Shoreditch, Spitalfields, Hoxton and Islington.

For an area so immersed in history there is plenty to see and visit. Shoreditch is home to one of the oldest religious sites in Britain with the Church of St Leonard dating back to the 12th Century.

The Geffrye Museum, built in 1714 is one of the oldest listed buildings in the area showcasing English interiors dating back to the 18th and 19th Century. There are many markets with Columbia Road flower market a must visit on a Sunday morning and Spitalfields market which dates back to 1638, hosts a vintage market on Thursday and a general arts and craft market on the weekend.

Brick Lane, populated by diverse immigrant groups, is currently home to a large Bangladeshi population. It is well worth a visit for its market and the many excellent curry houses.

Shoreditch is home to the world's first pop-up mall – Boxpark. Constructed out of shipping containers it has a number of small independent fashion and design companies allowing retailers an affordable opportunity to show case their brands. On the upper levels there are a number of vibrant spaces to eat and drink.

A must is a tour of the world famous street art found all over Shoreditch and Hoxton by artists such as Banksy, Stik, Zabou, Lewis Campbell and Nathan Bowen to name a few. Roads worth visiting to see this amazing graffiti are Princelet Street, Great Eastern Street, Rivington Street, Brick Lane and Shoreditch High Street.

The regeneration of Shoreditch has resulted in many new bars and restaurants opening in the area and Shoreditch is particularly well known for its cocktail bars. 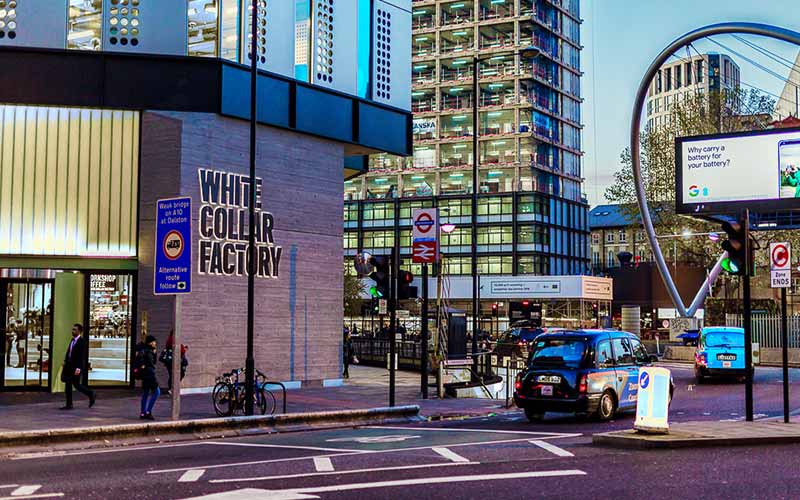 The regeneration of Shoreditch has resulted in many new bars and restaurants opening in the area and Shoreditch, Hoxton and Spitalfields are particularly well known for their cocktail bars, night life and some of the most prominent hotels. Anything from quirky to minimalist chic, they offer fine dining and lounging roof top pools. Some of the most popular sited are Shoreditch House, The Curtain, Boundary Hotel, Nobu, Montcalm, The Albion and Redchurch Town House.

The area has grown in prominence as a shopping destination and has an interesting blend of independent shops and brand names, in fact Redchurch Street with it clothing boutiques, concept and interior stores is sometimes known as the Bond Street of East London.

Rich Mix in the borough of Tower Hamlets is a former leather factory which has been transformed into a multi arts venue with a number of performance spaces, offering a platform for emerging artists and musicians as well as home to a three screen cinema.

There are a number of open spaces in the Shoreditch area, the most notable is Shoreditch Park in the Borough of Hackney. This 19 acre park received a green flag award for its high environmental standards and excellence of recreational areas and has been the home to the Shoreditch festival in the past.

Aske Gardens close to Old Street, were landscaped in 2014 and house tennis courts and a multi-use play area. Hoxton Square thought to be one of the oldest in London and originally laid out in 1683, has now become the centre of Hoxton's media and art scene. With a number of fashionable bars, Hoxton Square has become the epicentre of Shoreditch’s social scene and is the perfect place to relax on a hot summer’s day and enjoy some people watching.

Boundary Gardens in Arnold Circus is a garden rotunda, dating back to 1890 when the Boundary Street Estate was constructed. It was the centre piece of Britain's first publicly funded social housing scheme, located on the boundary of Shoreditch and Bethnal Green. Arnold Circus was restored, as well as its listed bandstand in 2010 by LDA Design, it now provides superbly planted gardens as well as seating.

Old Street Roundabout takes you to Shoreditch, the City, Angel or Clerkenwell. Also known as ‘Silicon Roundabout’ due to the density of tech companies in the area, it is set for a major refurbishment in 2020.

Shoreditch High Street (A10) is part of a major Roman Road previously known as Ermine Street which linked London to York, it now is the most prominent Shopping Street in the area and links to the City's financial district.

Great Eastern Street and Commercial Road (A1202) which run through the heart of Shoreditch, link the Old Street roundabout and City Road, leading to Spitalfields market to the Eastern fringes of the City.

The University of Law on Bunhill Row is the largest Specialist University of its kind in the UK, offering BA Undergraduate and MSc postgraduate courses as well as online MSc courses.

Shoreditch's reputation as a fashionable neighbourhood continues to attract students and property to rent in Shoreditch, Hoxton and Spitalfields are in high in demand due to the numerous Universities and colleges within the area.

A number of state, private and independent schools exist in Shoreditch, Spitalfields and Hoxton all producing excellent results.

The Lyceum on Paul Street has been established locally for over 20 years and apart from the traditional curriculum prides itself on expanding the pupil's minds with drama, various language courses and Yoga.

Rosemary School on Branch Place is a private and independent primary school accepting children from the ages of 3 to 11 years old.

Shoreditch Park Primary School on Bridport Place is a state run primary school with the office for Standards in Education (Ofsted) reporting it as an outstanding school.

Moorfield Eye Hospital, founded in 1805 and based at its present site on City Road since 1899, is the largest centre for ophthalmic research, treatment and teaching in Europe.

Other hospitals found in the local area include Homerton University Hospital and The Royal London Hospital. 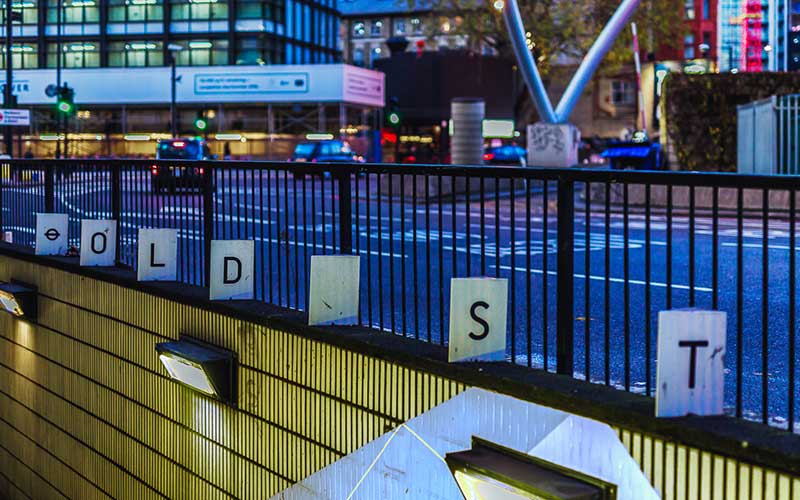 For those preferring to travel by the iconic London double decker bus there are twelve different routes connecting Shoreditch, Hoxton, Spitalfields, Bethnal Green and Dalston to The City and West End of London.

do you own property in Shoreditch?
find out how much your property is worth