Located in the Borough of Islington, is ideally situated for those seeking the city dweller's life. 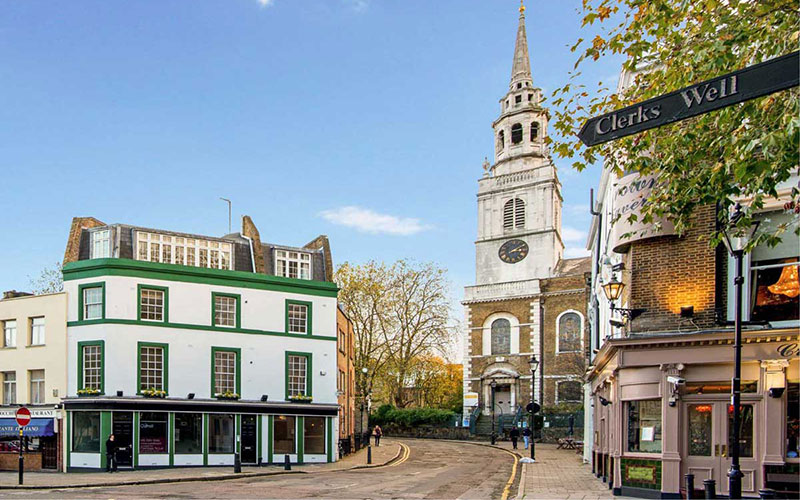 Clerkenwell's industrial and commercial history are quite striking with its current prosperity indebted to its past, dating as far back to its monastic routes. In this respect Clerkenwell has been progressive, with brewers, waterworks, distilleries, ironmongers, gemologists, watchmakers and print workers all having used the area as their work place. Many of these outstanding buildings have been converted into new flats in Clerkenwell EC1, which are for sale or to rent through Hurford Salvi Carr.

Home to some of the first London loft apartments, these industrial buildings have enjoyed a revival having been transformed into some of the most exhilarating and breathtaking places to live.

Clerkenwell's gentrification in the early 1990's has attracted all walks of life and now workers from the financial, legal and creative sectors call Clerkenwell and The Barbican Home.

As pioneers of Clerkenwell's EC1 housing market, Hurford Salvi Carr has had offices based on St John Street and Britton Street for over 20 years and have a number of loft apartments, modern developments and new properties for sale and to let in Clerkenwell.

Clerkenwell has to be one of the most convenient locations in London surrounded by The City, Shoreditch, Islington, Covent Garden and Bloomsbury making Clerkenwell properties for sale in EC1 highly sought after.

Clerkenwell, Farringdon, Smithfield and Barbican residents are certainly inundated with the most interesting and diverse places to visit.

It has many places of worship, from St John’s Priory Church to St Bartholomew the Great, both believed to be some of the oldest churches in London to St Peter's Italian Church, the epicentre of Little Italy.

The latter announced in spring 2015 it's relocation to the Southern end of Smithfield market taking over the General market, Red house and engine house. Designed by the famed Architect Sir Horace Jones also responsible for designing Tower Bridge, Billingsgate and Leadenhall markets this is predicted to open in 2021.

The London Charterhouse which dates back to the 14th Century now opens its site to the general public with educational programs, wonderful landscaped gardens and a new museum documenting its history.

Clerkenwell is home to a large number of cafes, restaurants and shops, as well as stalls. 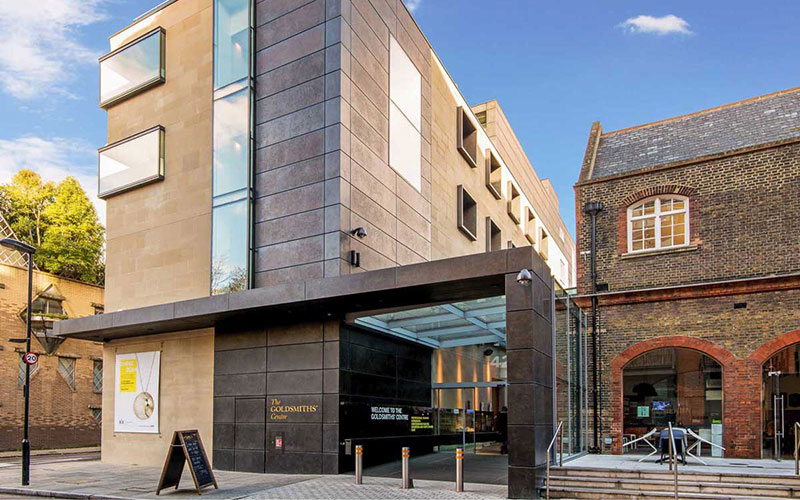 For performing arts there is Saddlers Wells Theatre, one of the world's leading modern dance venue's, to the Barbican Centre which is a member of the Global Cultural Districts Network, combining concert hall, cinema, art gallery, library and Theatre.

There are a number of Public Houses which open at 5.30am around Smithfield Market, a Grade II listed-covered market building which has traded as a meat market for over 800 years.

Clerkenwell Design Week (CDW) which takes place yearly in May has now firmly established itself as the UK's leading independent design festival; with over 35,000 visitors, 300 participating brands and a media reach of over 1 million.

Food markets can be found on Whitecross Street, Leather Lane and Exmouth Market, whilst there are an abundant number of restaurants catering for fast food, fine dining to Michelin Star choices. Some of our favorites are St John, Moro, Club Gascon, Luca and The Modern Pantry.

There are a number of public spaces in Clerkenwell, notably Clerkenwell Green which although no longer covered in grass, still retains the features of a well preserved village green.

The gardens of Charterhouse Square which are overlooked by Florin Court and The Charterhouse have recently been made public, having undergone a beautiful renovation programme with green lawns, seating areas and retaining its majestic plane trees, allowing local residents to benefit from the use of this secluded and quaint open space.

St John's Gardens, nestled between Britton Street and Benjamin Street has numerous mature trees, flower borders and the installation of a number of innovative benches designed by artists, which were sponsored by Bloomberg.

Northampton Square which is located between St John Street and Goswell Road takes its name from the Marquess of Northampton who was a local landowner. The Square became well known for its residents who were master jewellers and silversmiths as well as the home of the British Horological Institute. There is a band stand in the centre of the Square which in 2008 was the inaugural venue for the musical entertainment Big Summer Busk.

Major roads include the A201 Farringdon Road, which links Clerkenwell to Kings Cross St Pancras, the A5201 Clerkenwell Road which leads to Holborn, Hatton Garden one of the busiest diamond and gemologist trading centres in the World and now a conservation area and the A401 Rosebery Avenue, linking Clerkenwell to Angel and Islington.

Clerkenwell Road, St John Street and Goswell Road are prominent streets where there are a notable concentration of design professions and high-end designer furniture showrooms. It is claimed that Clerkenwell has the highest concentration of architects and building professionals in the world, with many of London's leading architectural practices having offices in the area. Cowcross Street which runs from Farringdon Station to St John Street has a number of coffee shops, bars and pubs.

The London School of Business in Holborn offers postgraduate programs and MBA courses specialising in Business development. City University London, located on St John Street offers bachelors, masters and doctoral degrees, with its legal practice courses having the highest grade rating from the SRA. Universities and colleges bring a sizable student population to the neighbourhood, adding to the eclectic mix of people studying, living and working in the area.

The Guildhall school of music and Drama, located in the Barbican was founded in 1880 and offers undergraduate and postgraduate degree programs in music, drama, opera, acting and production arts. It remains the UK’s largest provider of music education for under 18’s.

One of the most prominent colleges in Clerkenwell is the Italia Conti Academy of Theatre arts based on Goswell Road, a performing educational college it is sometimes known as the academy school for stars, exceling in acting, singing and theatre studies.

The Goldsmiths’ Centre on Britton Street, is the UK's leading charity for the professional training of goldsmiths, jewellery designers and silversmiths. In 1891 the company founded the Goldsmiths' Technical and recreative Institute, which went on to become Goldsmiths' College of the University of London.

A number of state, private and independent schools exist in Clerkenwell, The Barbican and City all producing exceptional results.

Two outstanding Independent primary schools are also found in Clerkenwell – Charterhouse Square and Dallington School, the latter whose head Mogg Hercules set up the school in 1978, was awarded an MBE for her outstanding contribution to education.

St Peter & St Paul is a state run catholic school set up in the late 1800’s which has recently been awarded a good rating by OFSTED.

Nearby hospitals include Saint Bartholomew's Hospital in West Smithfield which was founded in the 12th Century and is the oldest hospital in Britain.

The Royal National Throat, Nose and Ear Hospital is a specialist Otolaryngology hospital being the UK and Europe’s main centre for audiological medicine and research.

With the opening of Crossrail Elizabeth line (predicted in 2021) Farringdon Station will be the only station to be on both the north-south Thameslink service and the east-west Crossrail services, as well as having direct access to four of London’s International Airports – Heathrow, Gatwick, City and Luton. For those preferring to travel by London's iconic double-decker bus, there are nine different routes in the area. This well connected location in Central London makes it the ideal place to purchase or to let your City home. 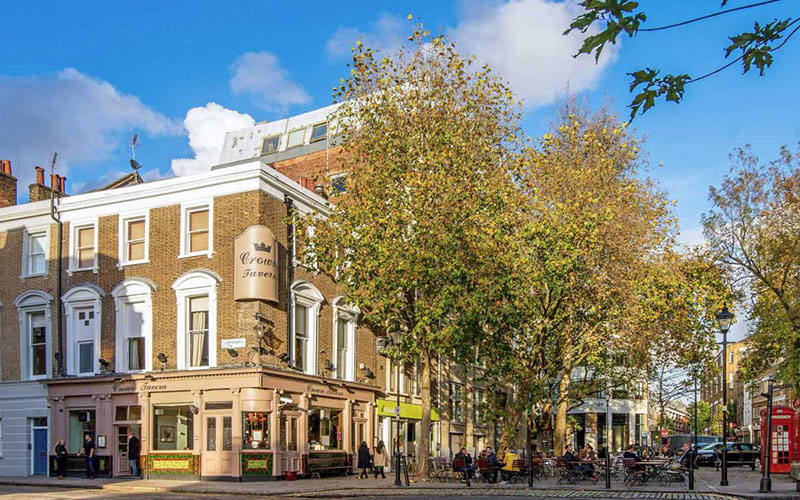 do you own property in Clerkenwell?
find out how much your property is worth